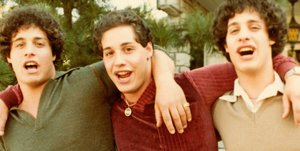 This sold out two screenings at the Cork Film Festival.  Our Cine Club committee gave it 5 stars, and want to give members who missed it a chance to see this incredible documentary.

Three strangers  – Bobby Shafran, Eddy Galland and David Kellman – were reunited at age 19 in 1980s New York by an astonishing coincidence after being born identical triplets, separated at birth, and adopted by three different families.

Their jaw-dropping, feel-good story instantly became a global sensation complete with fame and celebrity. However, it set in motion a series of events that revealed a sinister secret behind their miraculous reunion. Tim Wardle’s gripping documentary emerges as one of the year’s best thrillers, an exceptional work of investigative non-fiction that leaves audiences rubbing their eyes in disbelief.

Winner of Sundance Film Festival’s Special Jury Award, it is an exuberant celebration of family that transforms into a thriller with colossal implications and proof that life is truly stranger than fiction.

As gripping as a first-contact sci-fi. – The Guardian ★★★★

This fine documentary is the stuff of fraught, memorable drama. – The New York Times 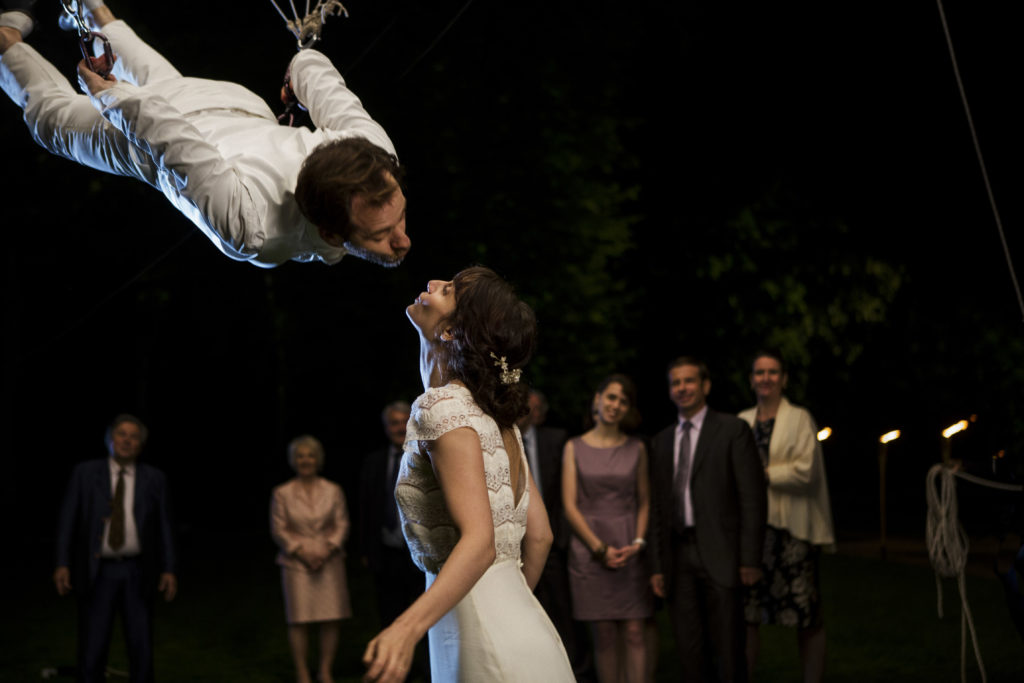 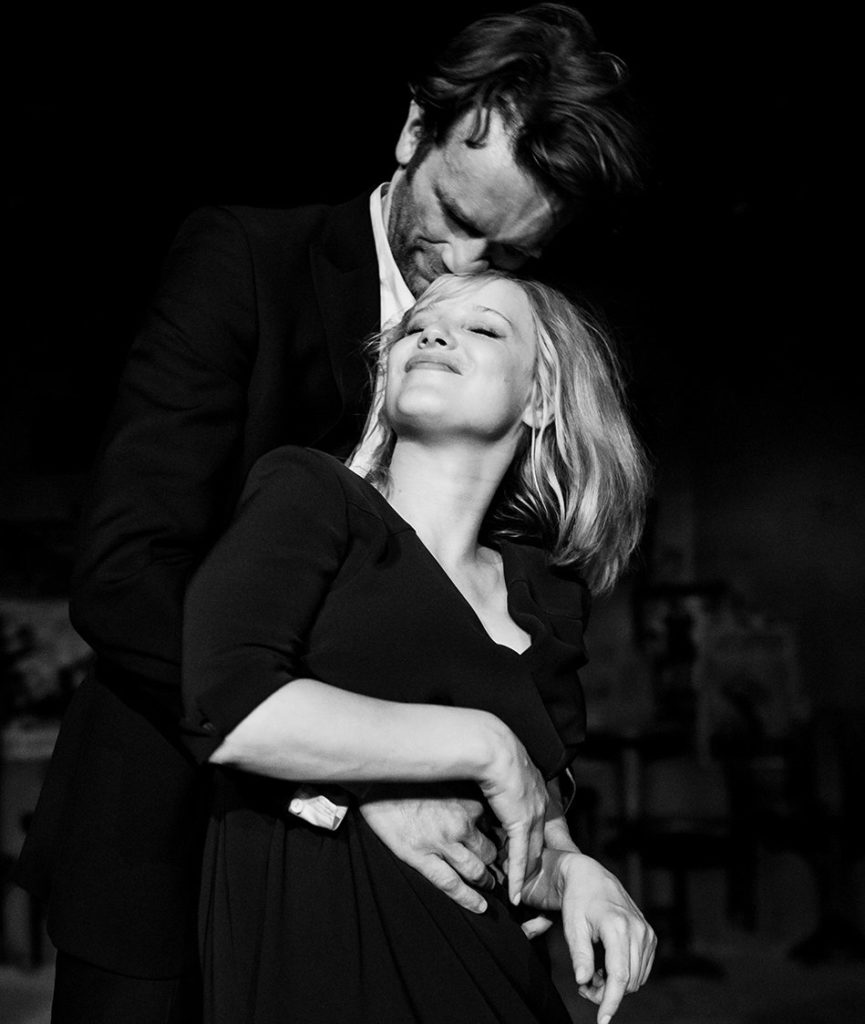 A chilling Soviet-era drama of wounded love and state sponsored fear in 1950s Poland from the director of Ida, which won the 2015 Academy Award Winner for Best Foreign Language Film. Best Director prize winner at Cannes.

Without any hyperbole, it is one of the films of the year, and possibly of the last decade. – Irish Independent   ★★★★★

Paweł Pawlikowski follows his Oscar-winning Ida with the stunning Cold War, an epic romance set against the backdrop of Europe after World War II. Sumptuously shot in luminous black and white, it spans decades and nations to tell a love story that is as tragic as it is moving, and as transportive as it is honest.

In the ruins of post-war Poland, Wiktor and Zula fall deeply, obsessively and destructively in love. As performing musicians forced to play into the Soviet propaganda machine, they dream of escaping to the creative freedom of the West. But one day, as they spot their chance to make a break for Paris, both make a split decision that will mark their lives forever. As the years march on in the wake of that moment, Wiktor and Zula watch the world changing around them, always struggling to find their moment in time.

Pawlikowski melds the personal with the political to exquisite effect. Set to a soundtrack that takes you from the rustic folk songs of rural Poland to the sultry jazz of a Paris basement bar, it’s a wistful and dreamlike journey through a divided continent – and a heartbreaking portrait of ill-fated love. 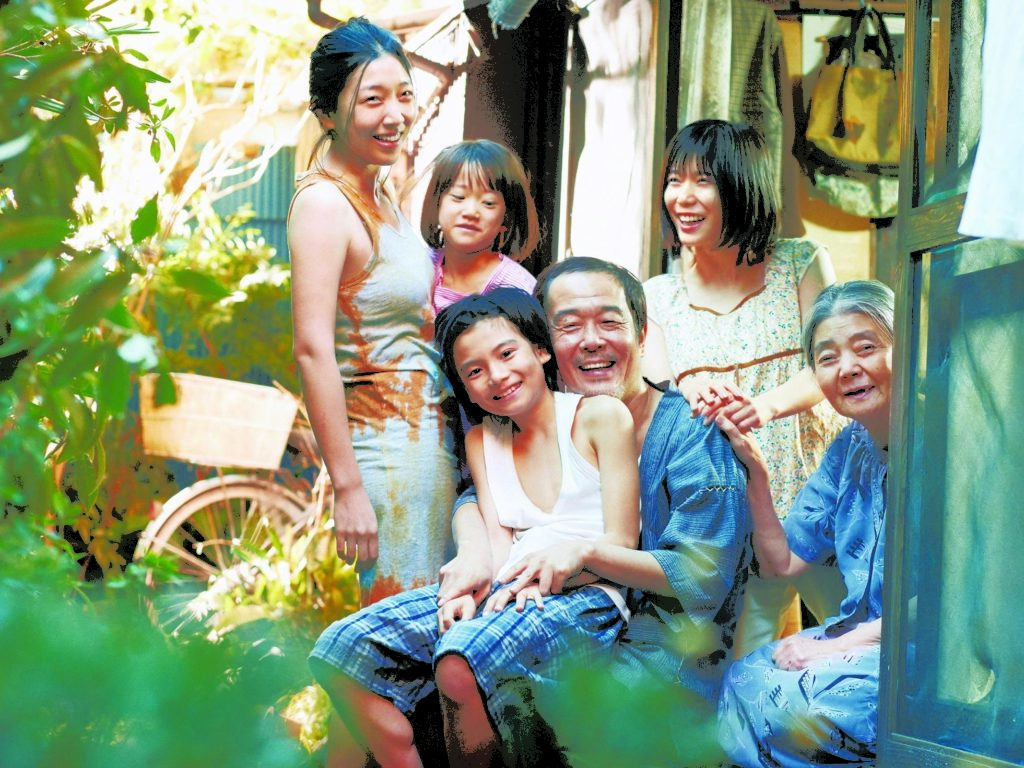 Winner of the Palme d’Or at Cannes 2018.  A drama of rare complexity and quality about the forces holding a struggling family together, it reveals a Japan rarely seen.

On the margins of Tokyo, a dysfunctional band of outsiders are united by fierce loyalty, a penchant for petty theft and playful grifting. When the young son is arrested, secrets are exposed that upend their tenuous, below-the-radar existence and test their quietly radical belief that it is love—not blood—that defines a family.

A film by Kore-Eda Hirokazu, the director of Still Walking, Like Father, Like Son and Nobody Knows.

A film of rare depth and quality that explores the meaning of family, and suggests that real parenthood is not given, but earned. – The Guardian ★★★★★

Kore-eda’s great subject is the contemporary family, a topic that gives him an immensity of themes, including loss, love, class, alienation in the modern world…a perfect story about being human. – The New York Times 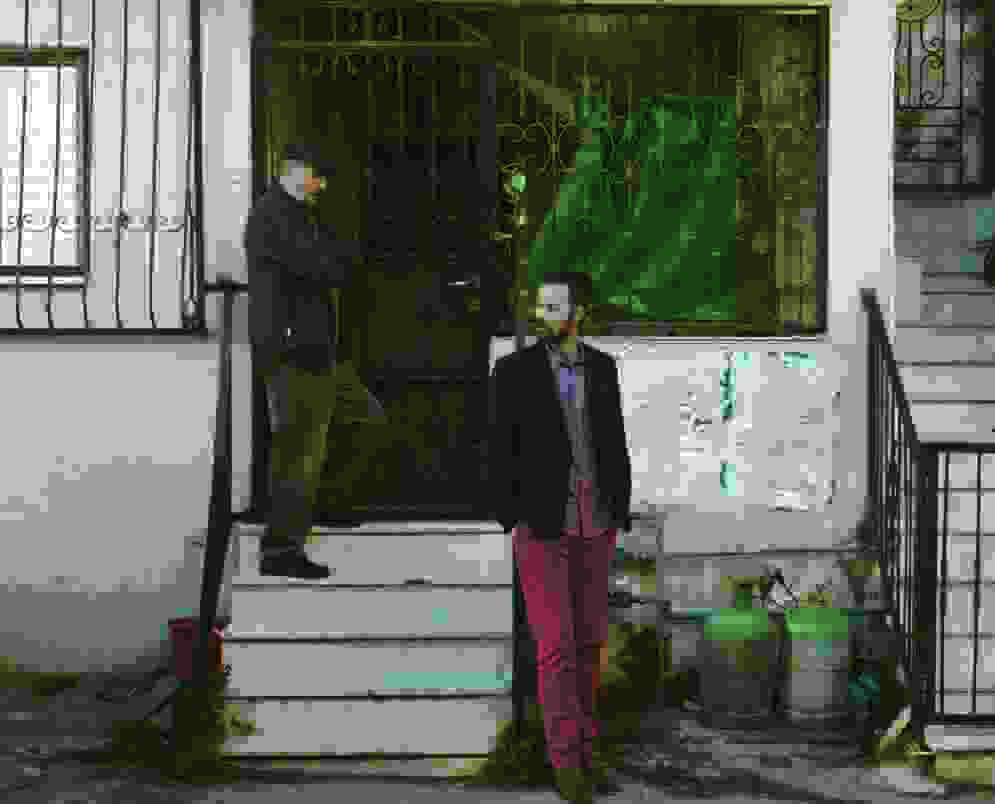 An estranged father-son relationship set in the vibrant city of Nazareth makes for an immensely entertaining comedy-drama that interweaves simmering tension with moments of terrific humour.

Shadi returns from Italy to his native Nazareth for his sister’s upcoming marriage. He has reluctantly agreed to honour his “wajib” or duty, to accompany his father in hand-delivering invitations for the wedding. Forced to spend time together after many years apart, past tensions and differences between father and son come to the surface. But as their journey continues, both men also begin to understand each other better.

Acting together for the first time, real-life father and son Mohammad and Saleh Bakri infuse their characters with warmth and humour. The result is a poignant yet entertaining drama.

Sensitive and imaginative…a fine testimony to the director’s powers. – The New York Times

The result of a ground-breaking collaboration with the women of Tanzania: 65% of the cast of non-actors are HIV positive. Both heart-warming and heart-wrenching, it’s an authentic view of their hard lives.

Pili is a young woman who provides for her two small children by tilling the local fields. Her husband has deserted her because she has a HIV condition that she keeps secret from the rest of her small community. Pili dreams of a better life for her family, so when she is offered the chance to take over a village market stall, she desperately tries to raise the cash for the required deposit.

Set and filmed in Tanzania, Leanne Welham’s debut feature is the result of a ground-breaking collaboration with the women of Miono, Tanzania, with 65% of the cast of non-actors being themselves HIV positive. Heartwarming and heartwrenching, Pili provides an honest, authentic view of Tanzanian life.

A young mother faces difficult decisions when offered the chance of a better life in Leanne Welham’s thoughtful drama. – The Guardian ★★★

HIV positive cast star in a film shining a light on the struggles of Tanzanian women living with HIV. – The Telegraph

With a compassionate and imaginative boldness, first-time British feature director Leanne Welham has shot a film about HIV in Tanzania. A drama that arose from what was originally a documentary project, Pili uses mostly non-professionals, many in just the same situation as their characters. – The Guardian  ★★★ 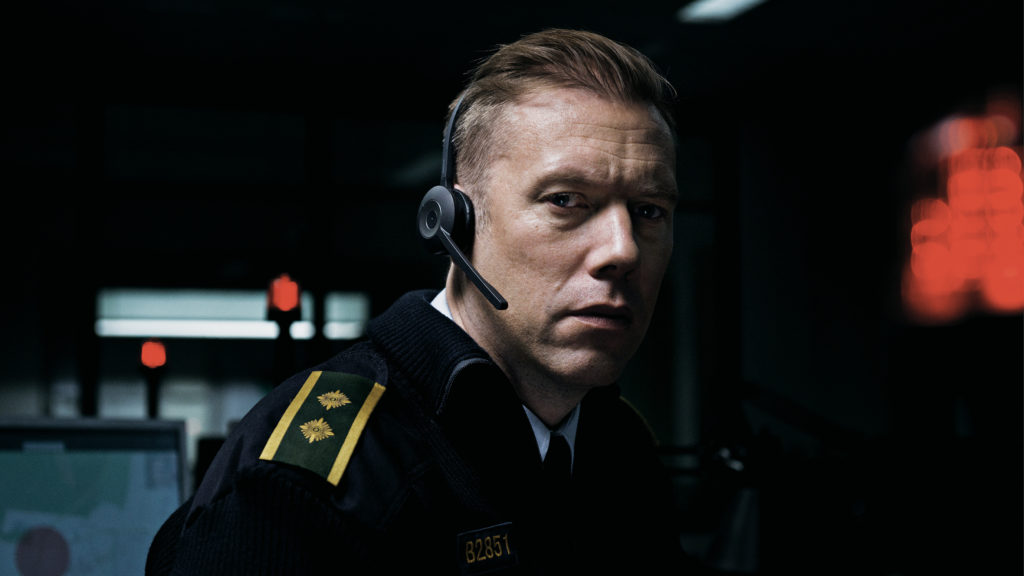 Alarm dispatcher and former police officer, Asger Holm, answers an emergency call from a kidnapped woman. When the call is suddenly disconnected, the search for the woman and her kidnapper begins.  With the phone as his only tool, Asger enters a race against time to save the endangered woman.  But soon he realizes that he is dealing with a crime that is far bigger than he first thought.

Smartly constructed and tautened with regular twists, but if it were merely clever, it wouldn’t test your nerves as it does. – The New Yorker

A cinematic study in tension, sound design, and how to make a thrilling movie with a limited tool box. – RogerEbert.com

A spectacular documentary that asks what mountains mean to us and why we are compelled to conquer them.  It features adrenaline-rushing footage and music by the Australian Chamber Orchestra.

Only three centuries ago, setting out to climb a mountain would have been considered close to lunacy. Mountains were places of peril, not beauty, an upper world to be shunned, not sought out. Why do mountains now hold us spellbound, drawing us into their dominion, often at the cost of our lives?

A truly amazing view from the top. – The Guardian ★★★★

For those terrified of heights, Mountain will be a nonstop nightmare. Yet big scares are a small price for the awe-inspiring footage you’ll see. – The New York Times

A ravishing feat of vertiginous filmmaking. – The Hollywood Reporter

A sublime rush of adrenaline and orchestral beauty…not for the faint-hearted. – The Guardian ★★★★ 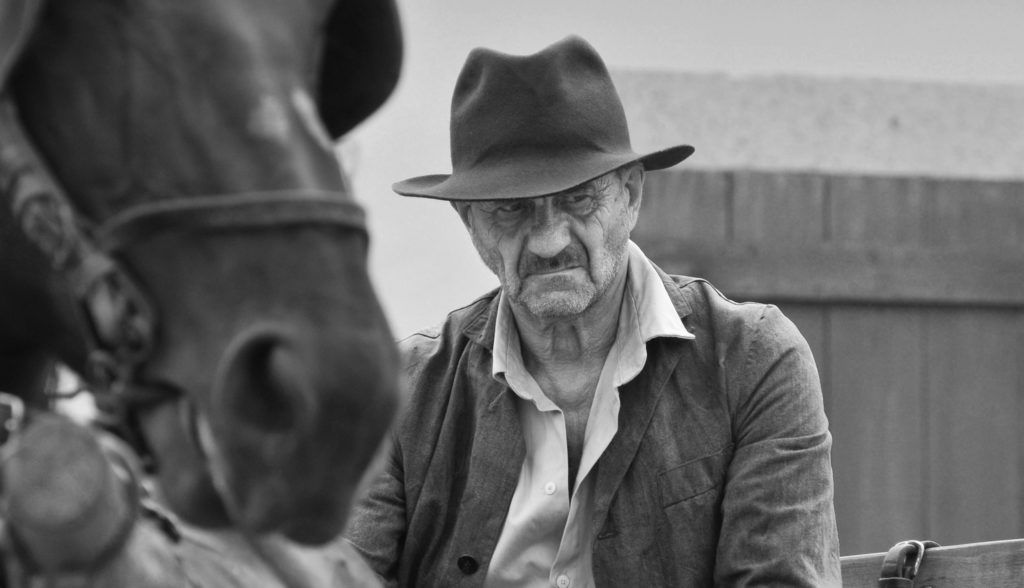 An Orthodox Jewish man and his son arrive in a Hungarian village at the end of WWII, upsetting the inhabitants who must confront the recent horrors they’ve experienced, perpetrated, or tolerated.

When two black clad men arrive at a country railway station, a classic western set up appears to be unfolding. But it’s 1945 in Soviet-occupied Hungary in the immediate aftermath of World War II, and by their appearance the men are Orthodox Jews. As the men make their way to town and word of their arrival spreads, there’s a growing panic among some of the more prominent townsfolk – especially town clerk, whose son’s wedding is later that day.

This difficult time in Hungary is rarely dealt with in cinema, and certainly not with as much clarity, economy and nuance as Ferenc Török displays here. A rare subject too, the grave and sobering issue of how the Gentile population of Nazi-occupied countries behaved towards Jewish neighbours, and how they have, or have not, come to terms with a life based on guilt and betrayal. With its monochrome splendour and striking soundtrack, morally compromised townspeople and its tick-tock narrative towards an unknown conclusion, we’re reminded of Fred Zinnemann’s taut and masterful High Noon.

1945 is a tense, chilling, beautifully nuanced take on a little-known slice of history based on the acclaimed short story Homecoming by Gábor T. Szántó.

Török’s engaging, imperfect feature has important and timely things to say about historical guilt and remembrance.  – The Irish Times ★★★ 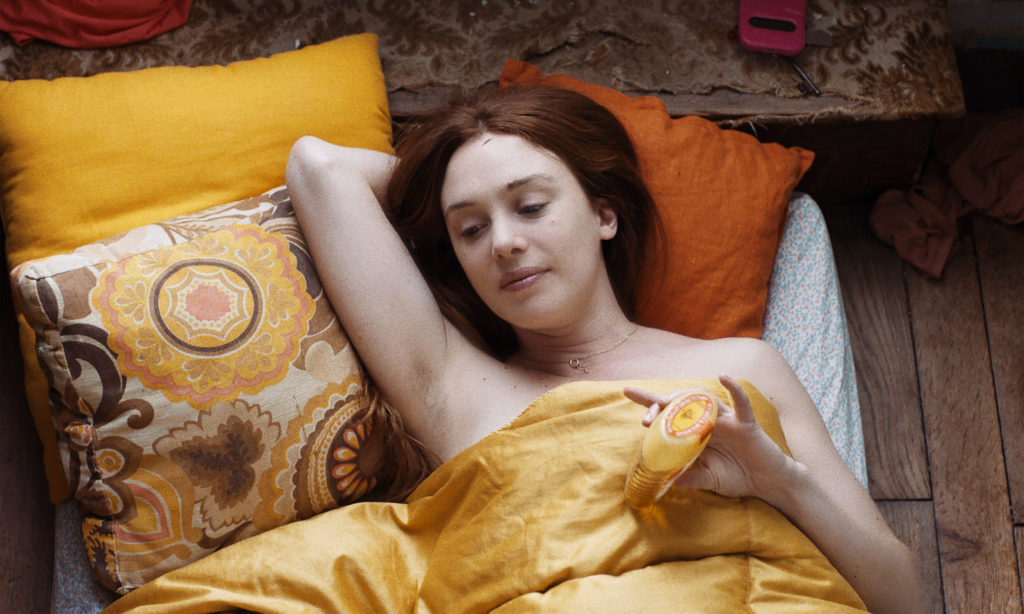