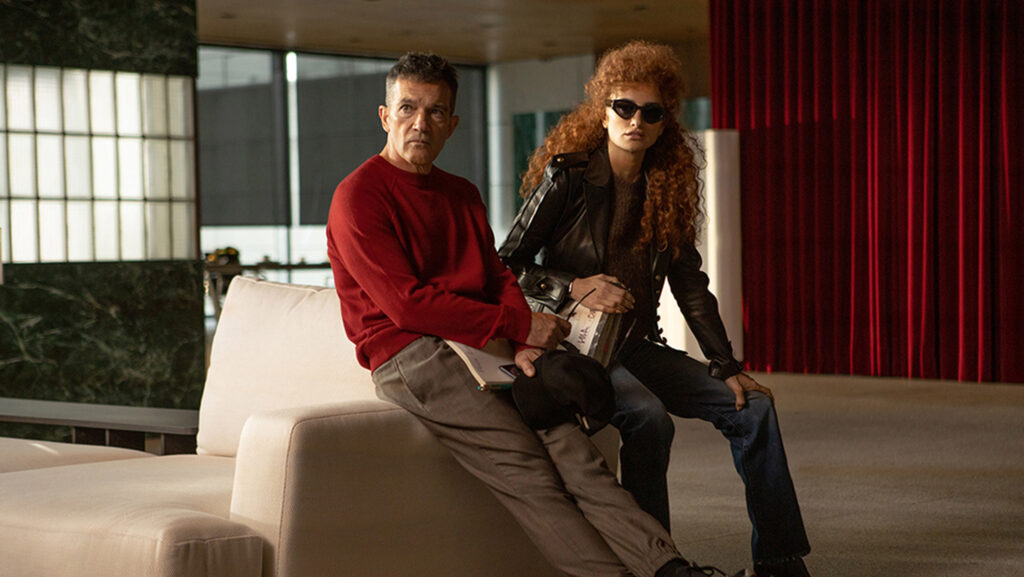 Penélope Cruz and Antonio Banderas star as two egomaniacs commissioned by a millionaire to make a movie together in this sharp comedy skewering wealth, art, and pride.

In this Spanish comedy, a millionaire decides on his eightieth birthday that he needs something more memorable than business success to guarantee his legacy. He decides to produce a film and after securing the rights to a Nobel Prize-winning novel, engages acclaimed but unconventional auteur Lola Cuevas (Penelope Cruz) to direct. She in turn casts two very different actors – global movie star Felix (Antonio Banderas) and distinguished thespian Iván (Oscar Martínez) – as her leads. Before long, methods, personalities and egos clash.

Official Competition is a clever satire that pokes fun at various elements of film culture, but also has some genuine laugh-out-loud moments. All three actors are clearly enjoying themselves, but it is Cruz that is the standout here.

An uproarious comedy that’s also deliciously well-performed… this Spanish-language gem cleverly gets away with being both roast session and sneaky celebration at once. – Tim Robey, Daily Telegraph

[Cruz] has rarely been stronger on screen, as an idiosyncratic martinet who nonetheless finds moments of genius and tenderness between her leading men. A blast. – Kevin Maher, Times [UK]

A sly satire of cinema that also manages to be a showcase for the comedic chops of its stars: Penélope Cruz, Antonio Banderas and Oscar Martínez. – Michael O’Sullivan, Washington Post

It dismantles the lofty ambitions of cinema as great, important and significant, a monument on the cultural landscape. Instead, it shows us art for ego’s sake, and it has a lot of wickedly spiteful fun doing so. – Wendy Ide, Observer

Our first-ever film from Somalia is a big-hearted and humorous tribute to the power of family.

Guled and Nasra are a loving couple, living on the outskirts of Djibouti city with their teenage son Mahad. However they are facing difficult times: Nasra urgently needs an expensive operation to treat chronic kidney disease. Guled is already working hard as a gravedigger to make ends meet. How will they find the money to save Nasra and can they keep the family together?

Finnish-Somali writer-director Khadar Ayderus Ahmed’s poetic debut is charming and wistful without ever feeling maudlin. It’s a beautiful love letter to the power of family.

A handsome, widescreen fable about family bonds and financial insecurity, this Somali-language film’s simplicity and economy is its power. – Observer [UK]

A film brimming with authenticity that, supported by three riveting performances, highlights how love and family fuel us.– Insession Film

Charming and wistful without ever feeling maudlin, The Gravedigger’s Wife is a beautiful love letter to the power of family. – RogerEbert.com

It’s a gentle, humorous film in Africa’s quietist cinema tradition with grace notes of irony and wit. – The Guardian

Irish filmmaker Sinead O’Loughlin will introduce and screen her short film, Lamb, before the feature. 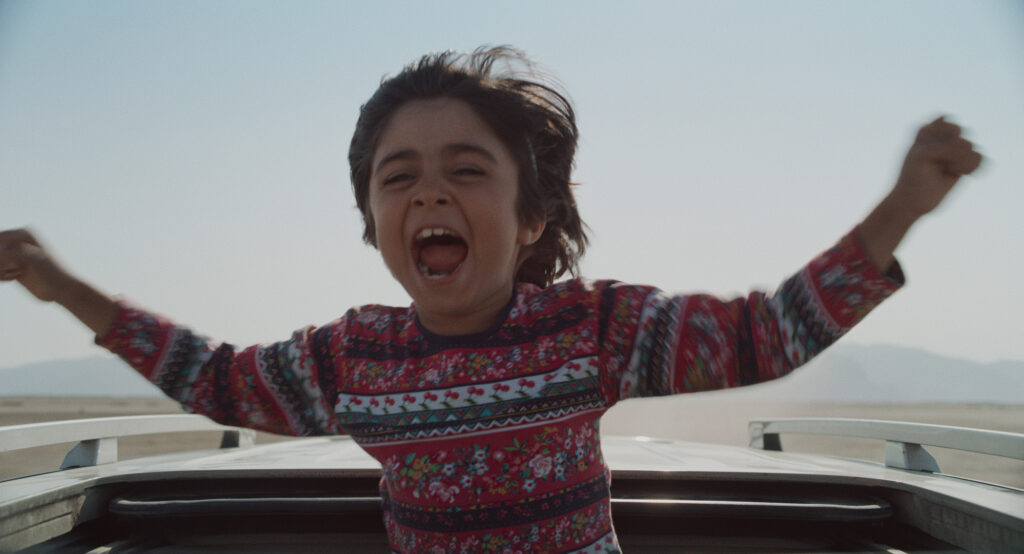 In July 2022, Jafar Panahi [director of Taxi Tehran which we showed in 2016] went to the Tehran prosecutor’s office to inquire about the arrest of a filmmaker detained in the government’s crackdown on protests. Panahi himself was arrested and, on a decade-old charge, sentenced to six years in jail.

From Variety on 28 January 2023: A ruling on Jafar Panahi’s release from Tehran’s Evin prison is deemed imminent now that Iran’s supreme court has overturned the conviction that led to the incarceration last year of the auteur who is considered one of Iranian cinema’s greatest living masters.

We fervently hope for Jafar’s release from prison and, in the meantime, we are pleased to present this wonderful film by his son and collaborator.

Hit the Road takes the tradition of the Iranian road-trip movie and adds unexpected twists and turns. It follows a family of four — two middle-aged parents and their sons, one a taciturn adult, the other an ebullient six-year-old — as they drive across the Iranian countryside. Over the course of the trip, they bond over memories of the past, grapple with fears of the unknown, and fuss over their sick dog. Unspoken tensions arise and the film builds emotional momentum as it slowly reveals the furtive purpose for their journey. The result is a humanist drama that offers an authentic, raw, and deeply sincere observation of an Iranian family preparing to part with one of their own.

It’s that blend of heartbreak and joy, profundity and absurdity that is the key to this enchanting movie’s magical spell. – Observer

Panahi is the son of the imprisoned filmmaker Jafar Panahi, one of Iran’s greatest living artists. He has his father’s subtle touch for interpersonal dynamics and for light tales that build to surprising hidden depths. – The Atlantic

A charming and witty comedy-drama, The Rose Maker is a crowd-pleasing tale of the fight for independence in the cut-throat world of artisan floristry.

Eve is one of France’s greatest rose growers, but her business is on the verge of collapse. When her secretary hires three inexperienced ex-convicts, they must team up to rescue the business in this verdant comedy. Despite her initial hostility to the idea, the new arrivals soon inspire Eve to give rose-designing one last shot.

A fierce lead performance from Catherine Frot proves a particular highlight here, with the Marguerite star once again proving herself to be one of France’s most compelling screen performers.

It’s a relaxed film, one that allows the audience to sit back and, if not smell the roses, then at least appreciate them. – New York Times

A film that wears its emotions lightly but generously, like dew on a blush-colored petal. – Washington Post 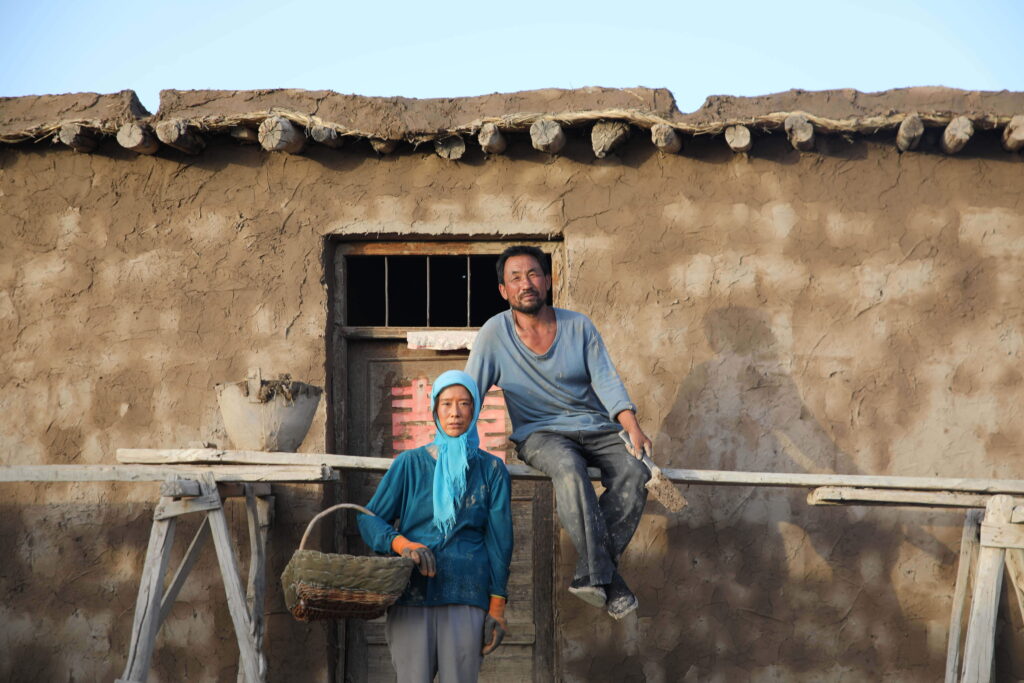 Return to Dust,  a low-budget art-house Chinese film became a deeply unlikely commercial smash, topping the Chinese box office ahead of various blockbusters. But then there would also be the equally strange, far sadder tale of how it vanished from cinemas. Seemingly banned merely for spotlighting the hard lives of the rural poor, the sleeper hit appears a snapshot of an airless political climate — and a symbol of the vulnerability of art…

Two weeks after becoming the most popular movie in China, Return to Dust disappeared without warning from cinemas across the country. The streaming sites on which it had also been released no longer carried it, either…

No explanation was provided. Indeed, it has never been officially confirmed that the film was banned. But ever since it has remained impossible to see legally in China. – Financial Times

Humble, unassuming Ma and timid Cao have been cast off by their families and forced into an arranged marriage. They have to combine their strength and build a home to survive. In the face of much adversity, an unexpected bond begins to blossom, as both Ma and Cao, uniting with Earth’s cycles, create a haven for themselves in which they can thrive. A story about eternal love, against the odds.

Return to Dust is many things — a vivid portrait of China’s hardscrabble rural north-west, an unexpected victim of state censorship — but it is first and last a love story. – Financial Times

It’s a gorgeous, quietly affecting film that finds an unassuming beauty in this simple life in rural China, but which doesn’t shy away from the extreme hardships faced by the very poorest. – The Observer

Return To Dust isn’t always an easy watch, but it’s a thought-provoking one with beautifully-judged performances that radiate warmth and encourage empathy. – Deadline Hollywood 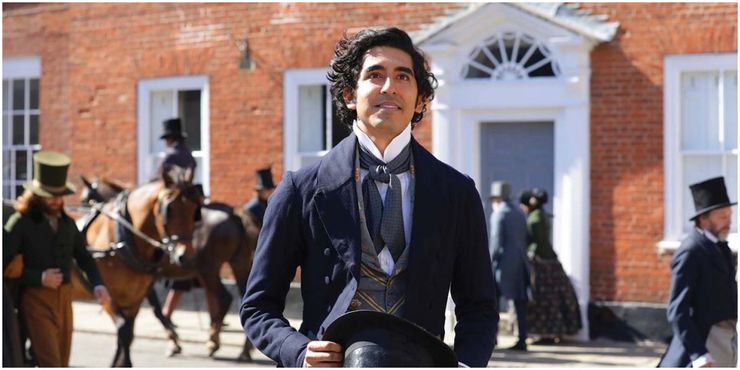 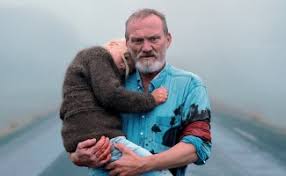 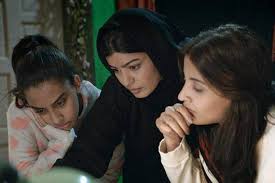